I’ll be honest, no one really uses ,pet2. It’s much slower than ,pet and has many bugs. So I would like to announce the removal of ,pet2 in favour of the new ,image command! While there is also a chance that this command won’t be used much either, but it contains way less bugs. The difference between this new command and ,pet2 is rather than trying to replicate the whole pet page, it replicates how you would see the pet in your groups. You can also call the command with ,img if you don’t want to type the full word.

Along with the new ,image command, there is now also a ,support command, which as the command name implies, will send you a Discord invite link to the CS Pound Development Server. Here you can suggest features that CS Pound should have or report any bugs you see. You can also be the first the know about newly released commands before they’re written on this blog!

Some other noticable changes are that ,help now sends the list of commands to you through PM instead of the channel where it’s called from, and hopefully fixed an issue regarding the bot’s playing status to periodically disappear. 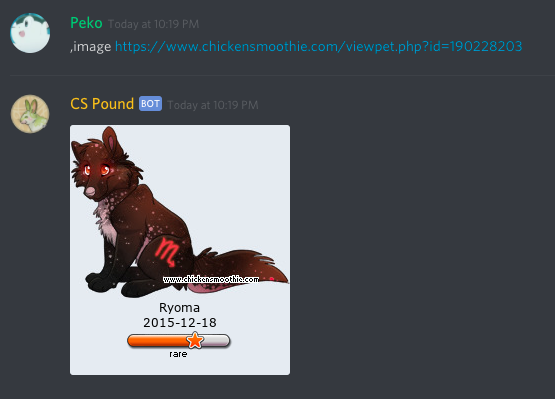